From Tuesday, August 29, to Saturday, September 16, 2017, in commemoration of the “150th Anniversary of Taiseihokan (Restoration of the Imperial rule) and death of Sakamoto Ryoma, “Kore Arata Exhibition – New Dawn of Japanese Art”- was held at Gallery Kubota Annex in Kyobashi, Chuo Ward, Tokyo, demonstrating collaboration of Meiji Restoration calligraphy and Japanese contemporary art. The exhibition showcased ninety-six works. They included contemporary calligraphy, ink paintings, Japanese and Western-style paintings, sculptures, fourteen authentic calligraphy works by imperial loyalists, the pistols used by Ryoma and replicas of the letters he had sent to his sister Otome (a travel journal of his honeymoon, thought to be the first ever written in Japan).

The theme of the exhibition was the strive for peace through contemporary art – a new dawn of Japanese fine art – after the manner of the authentic writings of the imperial loyalists who aimed for peace and equality.

The exhibition which lasted nearly two weeks attracted about 1,000 visitors and was a great success.

The “Ibaraki Minami Ryoma Society” helped us by lending out the authentic writings and replicas, and the gallery talk by the Society’s chairman, Mr Hidetaka Hashimoto, about the genuine writings of imperial loyalists of the Meiji Restoration, was held on Sunday, September 3, 2017, from 11:00 for an hour. 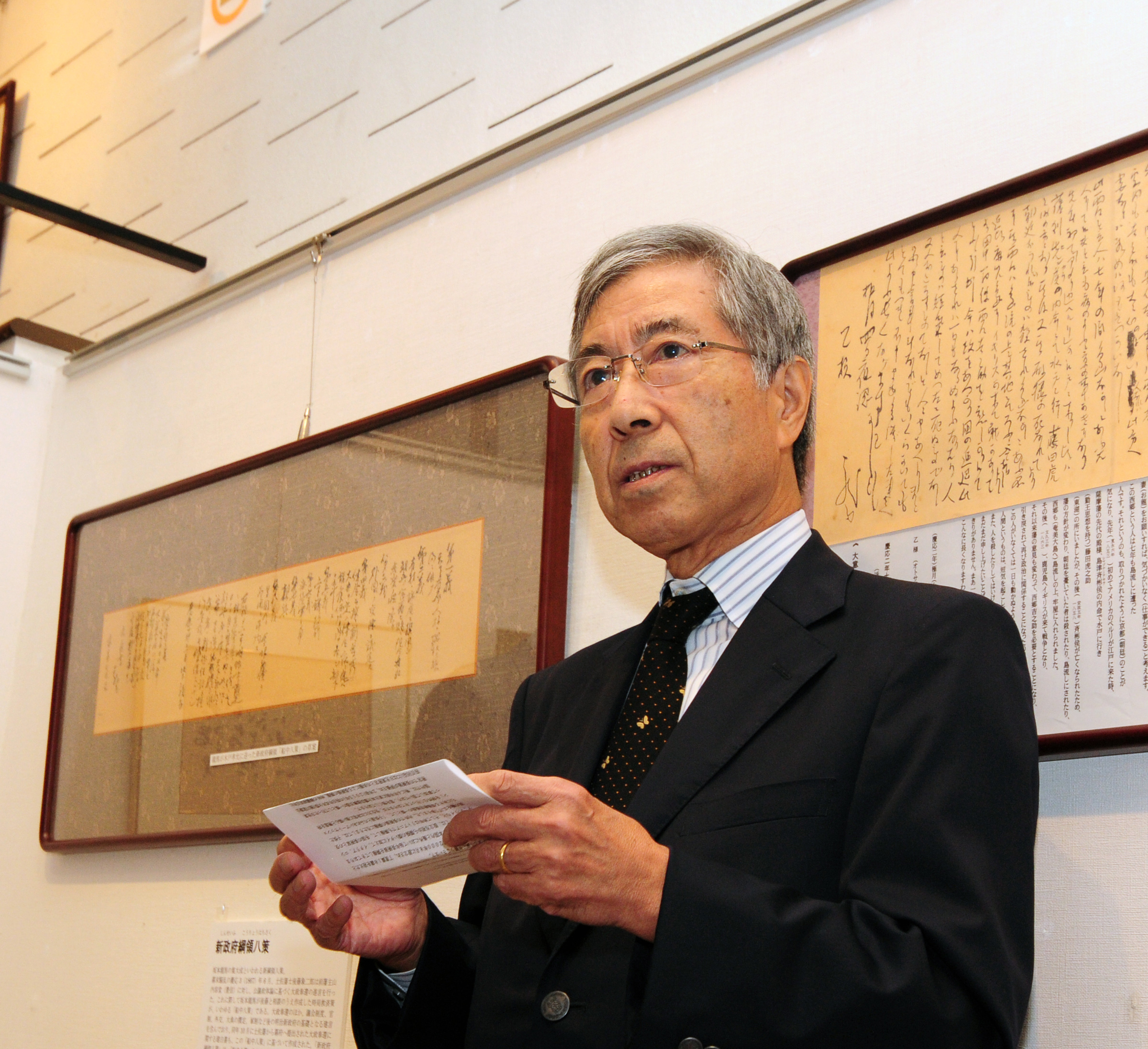 I’d like to say a few words, representing the World Art and Culture Exchange, the sponsor of the exhibition, in holding today’s gallery talk. Thank you very much indeed for coming to the “Kore Arata Exhibition” gallery talk today, despite your busy schedules.

The World Art and Culture Exchange was established in August 2000, so we will be eighteen years old this year. We have been holding art exhibitions every year in Japan and abroad. Overseas, we have organised exhibitions once or twice a year in Thailand, with which we have had a close tie since its establishment. We also have organized exhibitions in Italy, Russia, Portugal, Hawaii and other countries, including recent one in Lithuania and have been expanding our circle of friendship with artists in those countries.

In organising art exhibitions both in Japan and abroad, we have, without exception, given the “Fureai Art Session” for children as part of promoting children’s emotional development. The Japanese artists involved have taken part in such event with keen interest and enthusiasm, for which we are very grateful.

In Japan, the art exhibition that we organized in 2013 at Nikko Toshogu Shrine as a part of our contribution to the reconstruction from the Great East Japan Earthquake was highly appreciated by the Shrine. Since then, we have taken on many projects in collaboration with the Shrine. They include the art exhibition, co-sponsored by Nikko Toshogu Shrine, as a part of the 400th anniversary celebrations of passing-away of Lord Tokugawa Ieyasu, in 2015, the joint project for the 400th anniversary of the Shrine’s inauguration in 2016, and the co-sponsoring of the art exhibition to celebrate the completion of the major restoration of the “Yomeimon Gate” of the Shrine in July 2017.

Artists donated many pieces of art works to Nikko Toshogu Shrine through these exhibitions. But under its policy of effectively utilizing the donations and returning the benefits to local people, the Shrine initiated a project at the start of 2017 to lend out those artworks permanently to primary and secondary schools, public facilities and welfare institutions in the community.

I offer my thanks to the Japanese artists who have given us their cooperation and support in our past endeavours.

I will close my remarks by asking for your continued support and cooperation, because we wish to continue to introduce the art works by the Japanese artists both in Japan and abroad, through the art exhibitions and the publication of the magazine “bun-ten.” 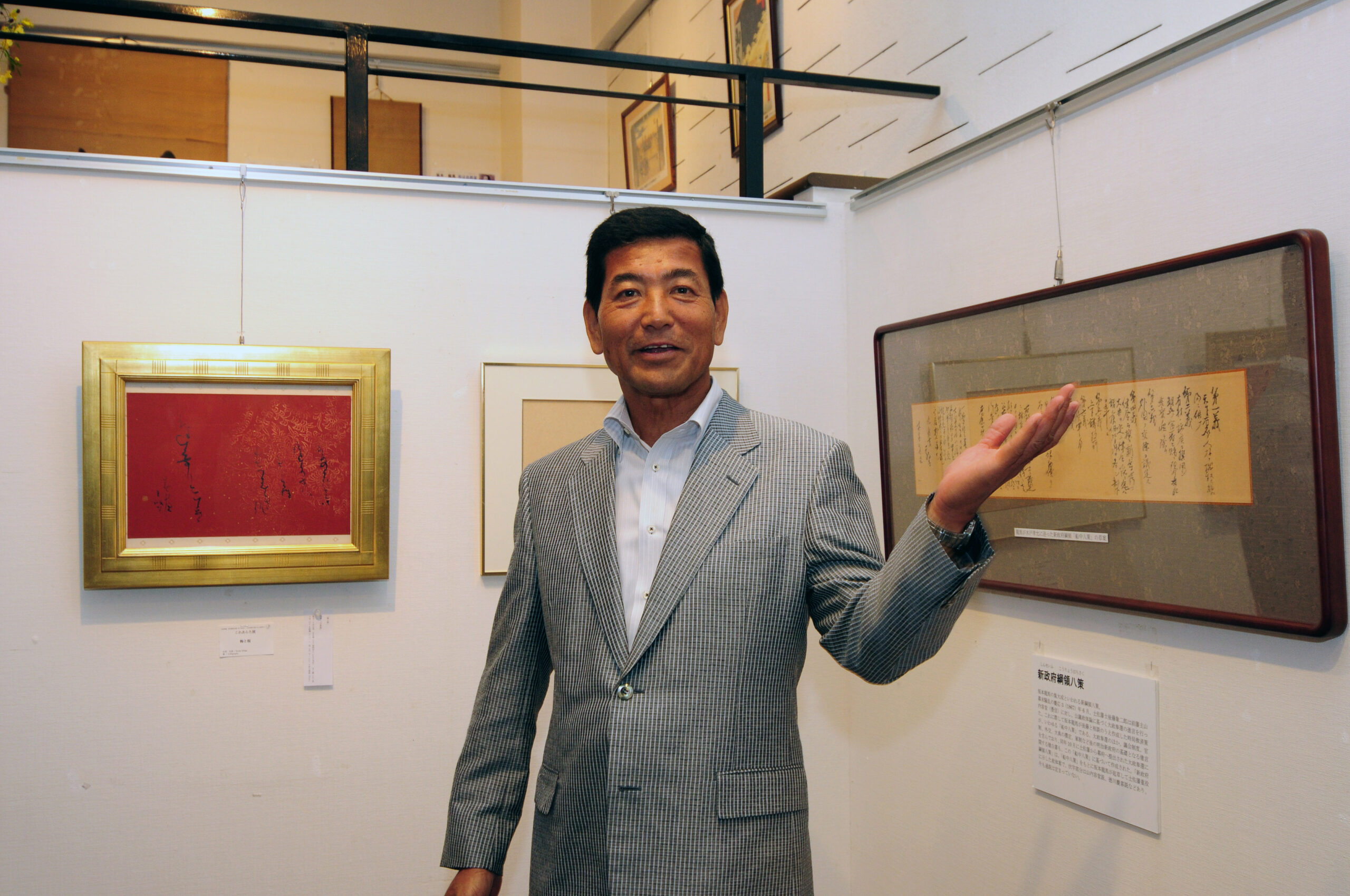 How do you do? I’m Hashimoto of the “Ibaraki-Minami Ryoma Society.”

For generations, my family members were chief retainers of the Hosokawa Clan, and they collected writings such as these during my great-grandfather’s time. Between my brothers, I inherited all the calligraphic works and am lending them out to educational organisations.

Since experts present today can read what the writings say, I will spare you the explanation, but will talk about the historical aspects because this year marks the 150th year since the restoration of the imperial rule and next year is the 150th anniversary of the Meiji Restoration.

Vision and aspiration are lacking in all aspects of Japan today. To re-attain them, I hope we could feel them from the strengths of the writings by the imperial loyalists and look at the writings from the perspective, “it is not what they had done, but for what they had lived for.”

(After this greeting, Mr. Hashimoto took the participants around the galley, explaining about calligraphic works that he lent to us.)

Saigo Takamori and Soejima Sokai were both exceptional calligraphers. What Chairman Hashimoto of the Ibaraki-Minami Ryoma Society had talked about was also at a professional level. Thank you very much indeed.

I felt that the exhibition combining the old writings and those of Heisei has made us feel the continual flow of 150 years. We tend to feel reverence and awe when we see the calligraphy by our predecessors in exhibit cases of art galleries and museums. However, thanks to the effort of WAC, we can see contemporary works and those by our predecessors who created the new Japan together at an easily accessible gallery in Kyobashi.

This is my honest feedback. Thank you very much. 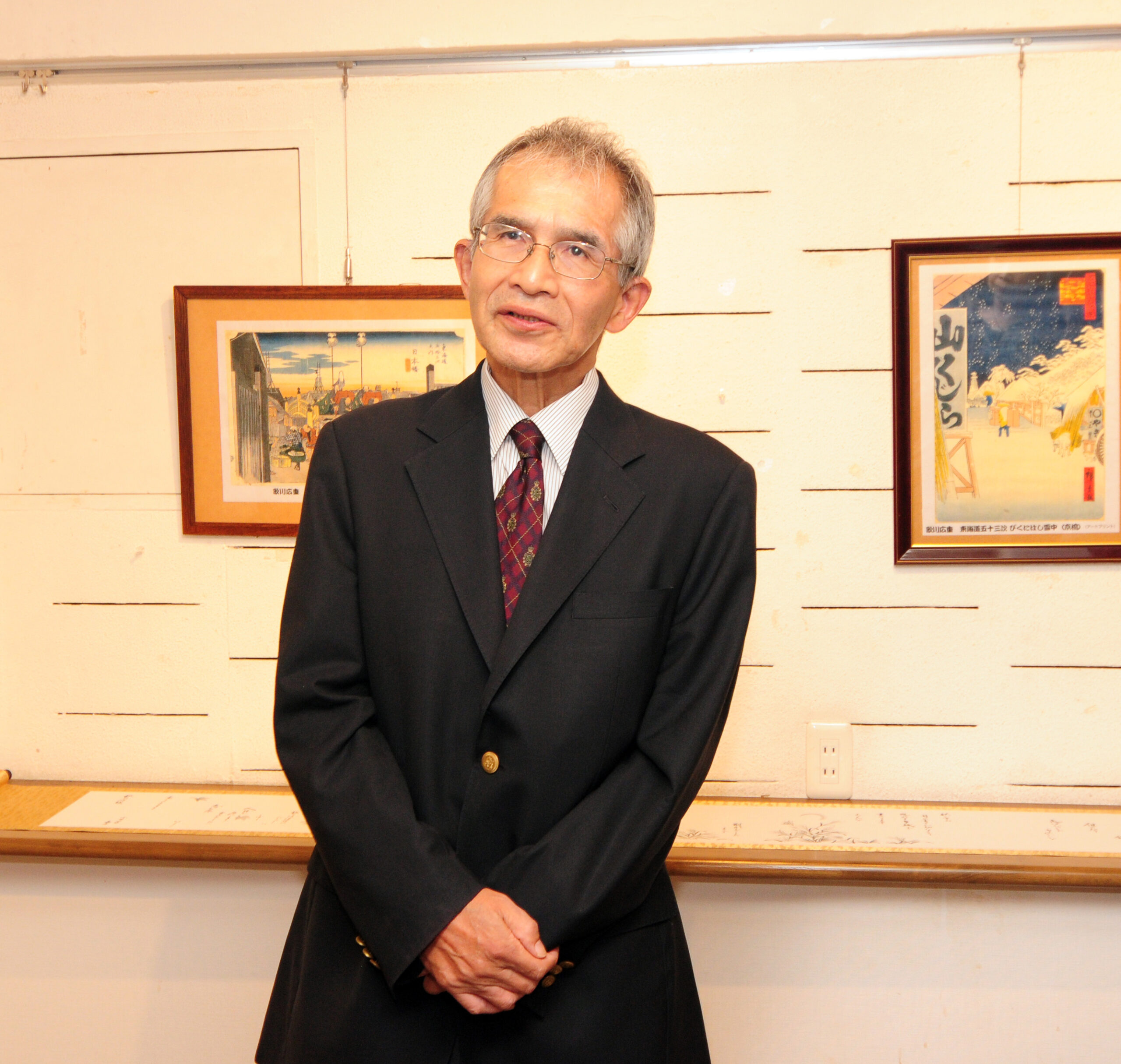 Authentic calligraphy of pro-imperialists exhibited at the “Kore Arata Exhibition”