On October 10, 2019 (Thursday), the Japanese Art Mission to Italy, comprising of artists featured in the Siena-Japan Friendship Art Exhibition, gathered at Narita’s New Tokyo International Airport. The group left for Italy after attending the inauguration ceremony, which is a tradition at Geibun-Association (formerly World Art and Culture Exchange.) They arrived at Florence-Peretola Airport at 19:40 the same day. The Japanese artists traveled overland to Siena and arrived at the hotel on schedule after 9 o’clock. Although the sun sets later than in Japan, the area was already cloaked in darkness, and the dreamy, large moon in the sky, which was to reach its full phase two days later, seemed to be welcoming the visiting Japanese Art Mission to Italy. 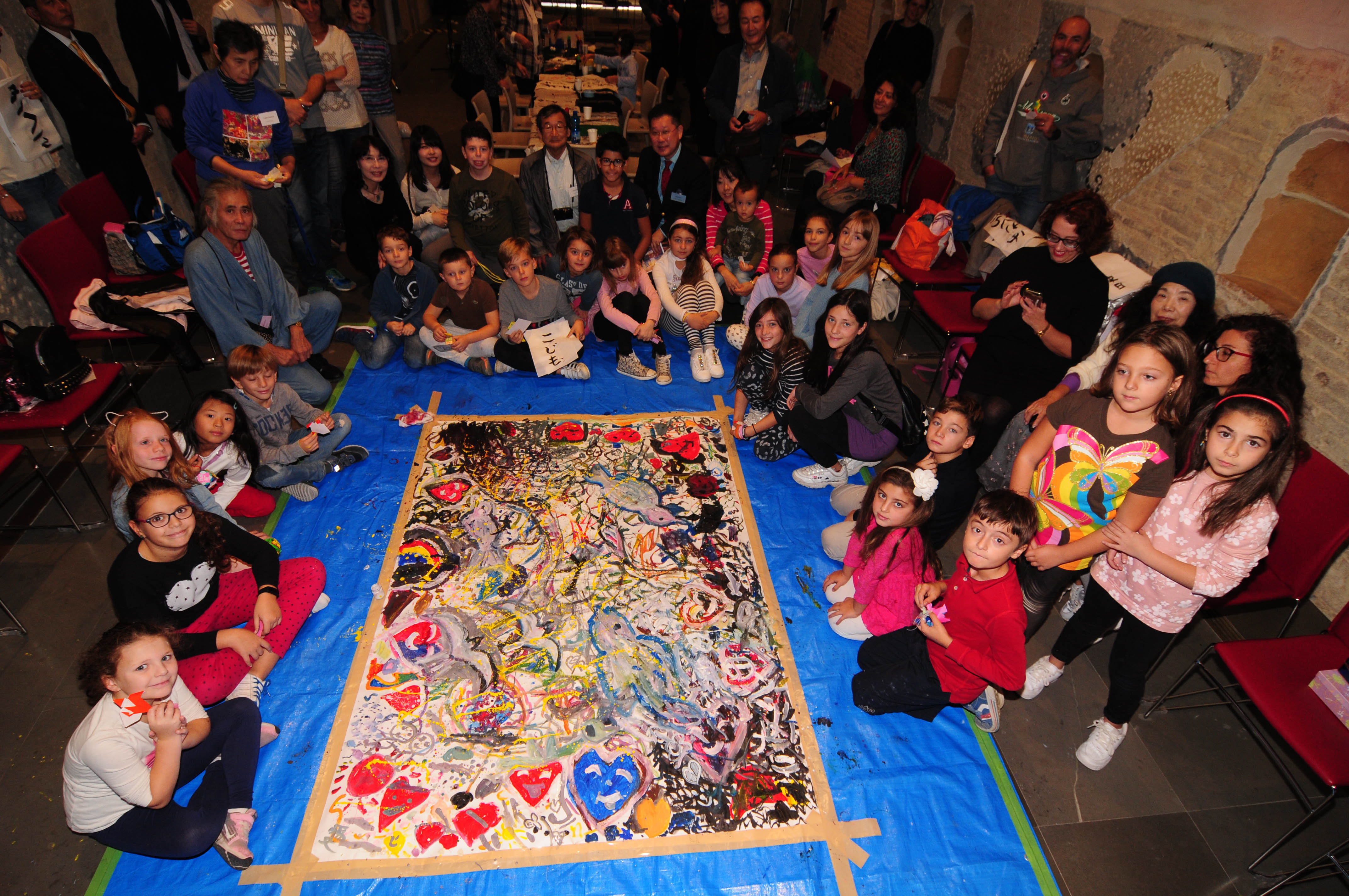 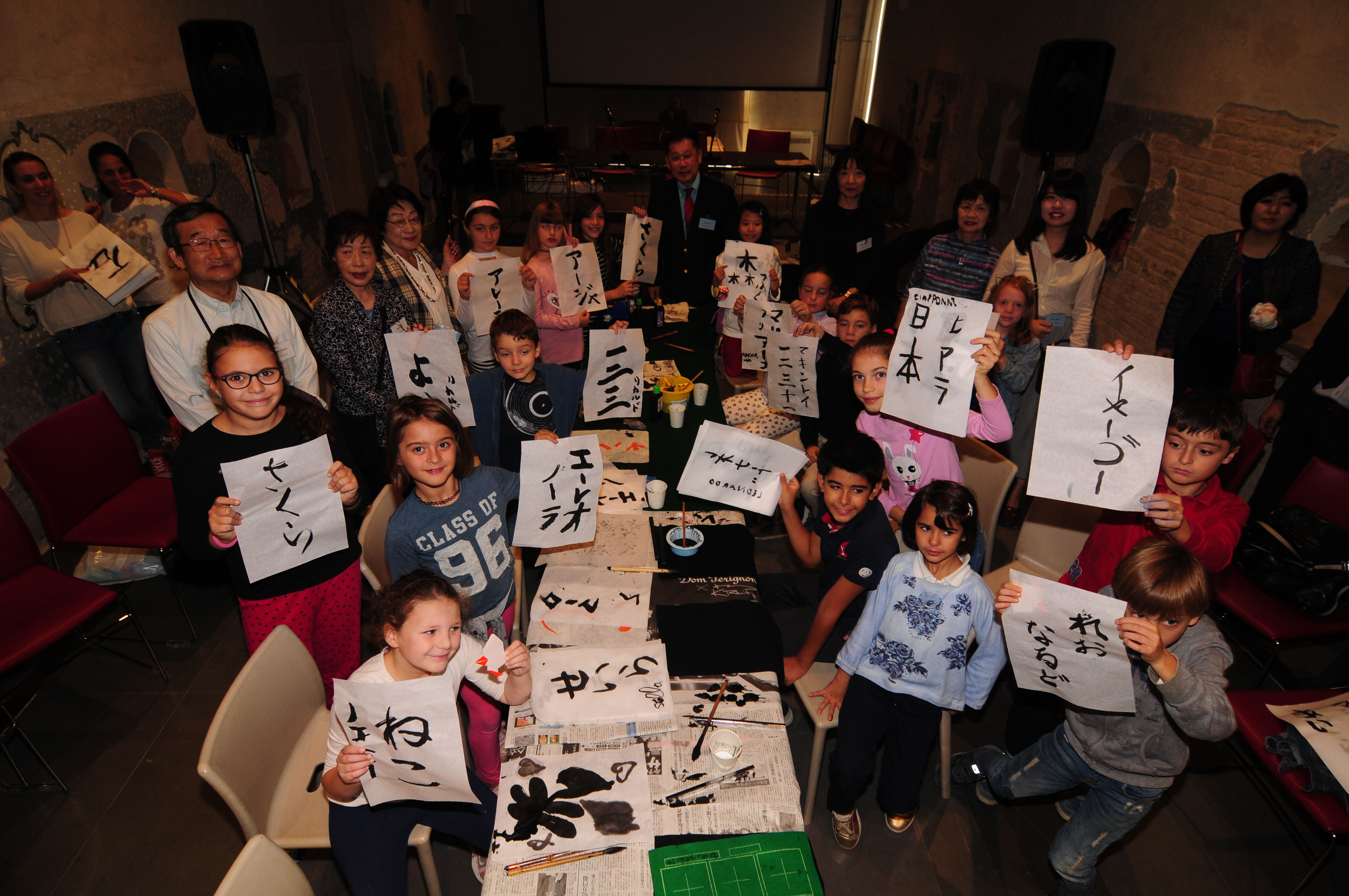 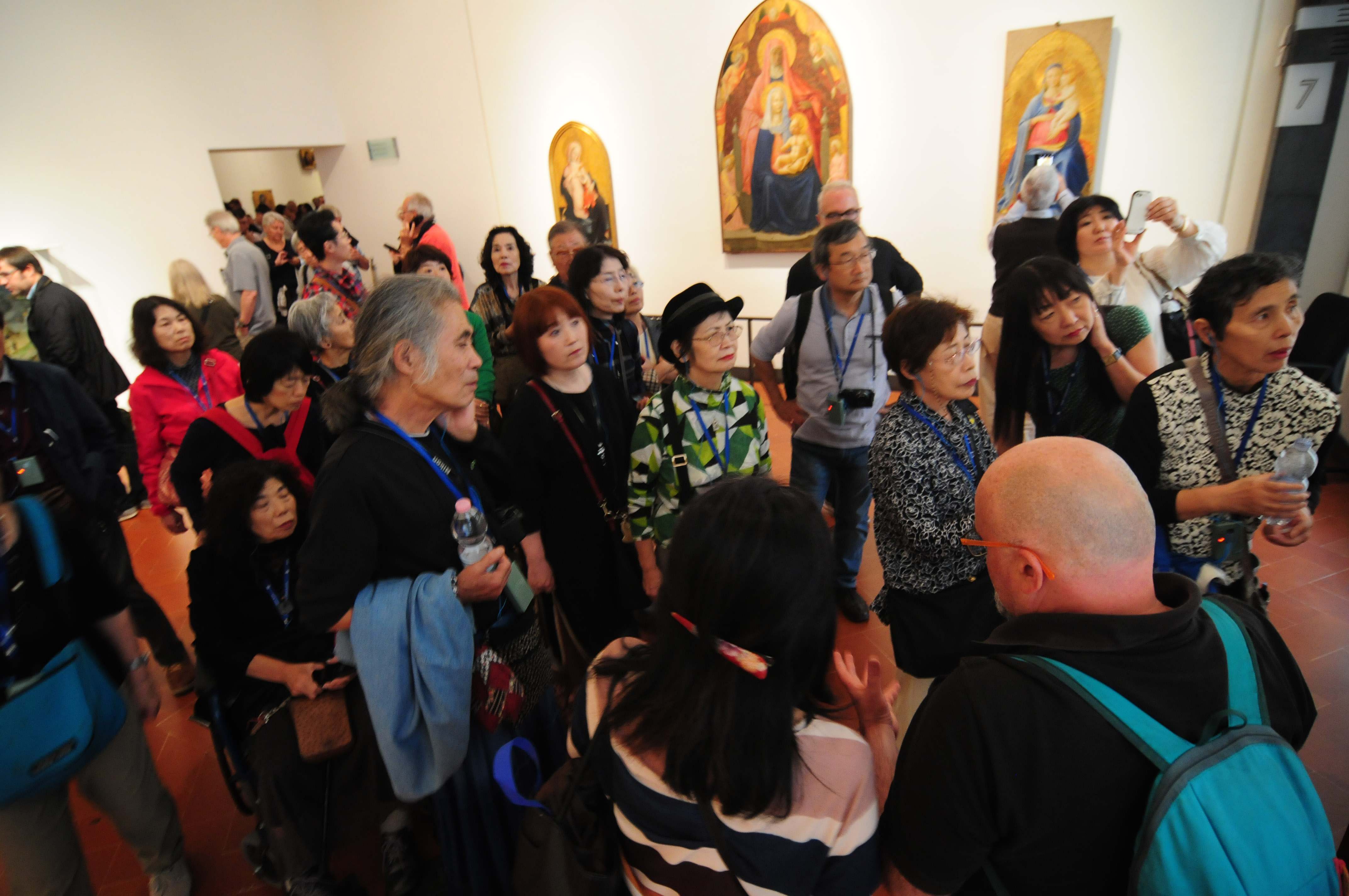 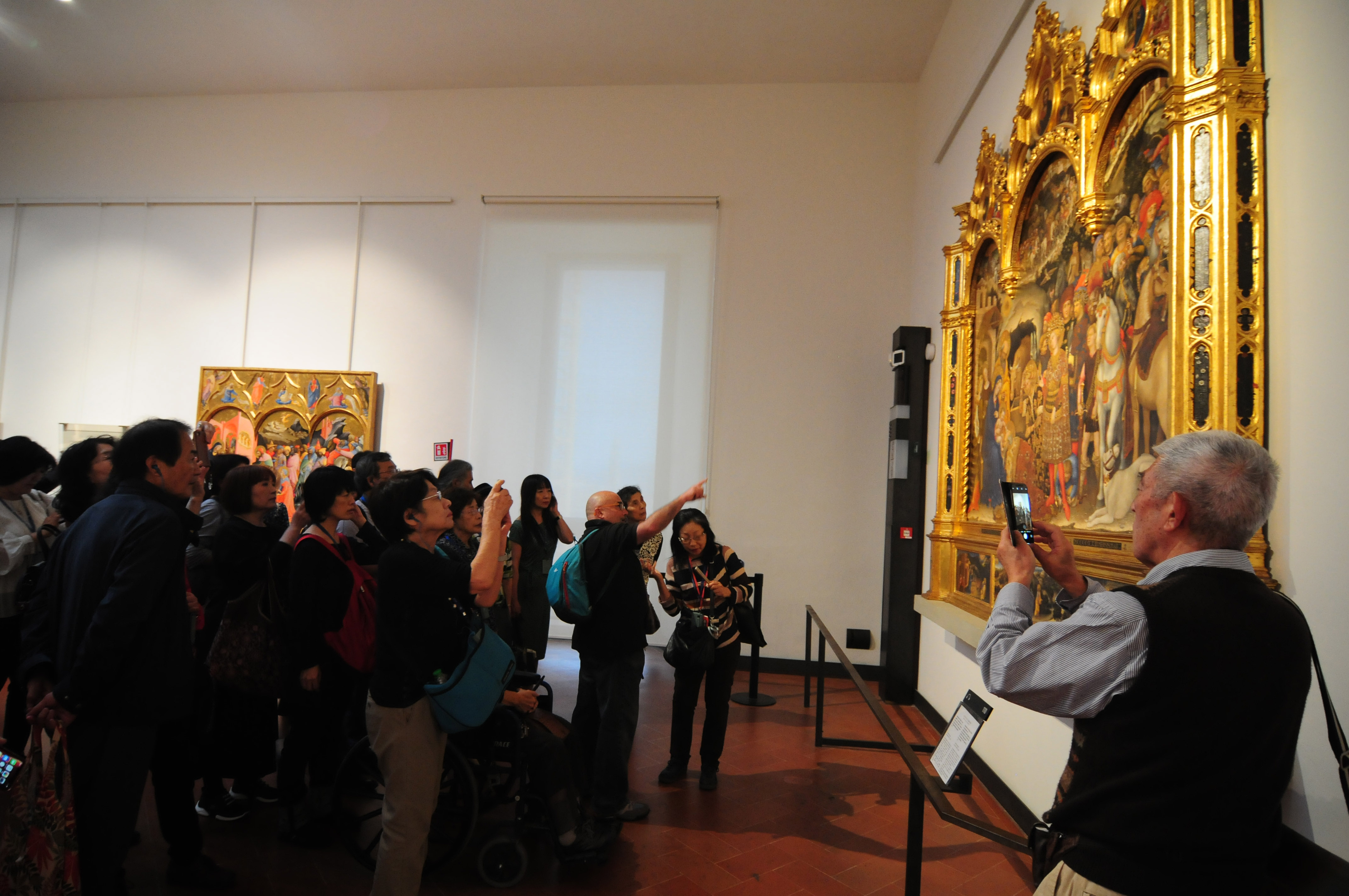 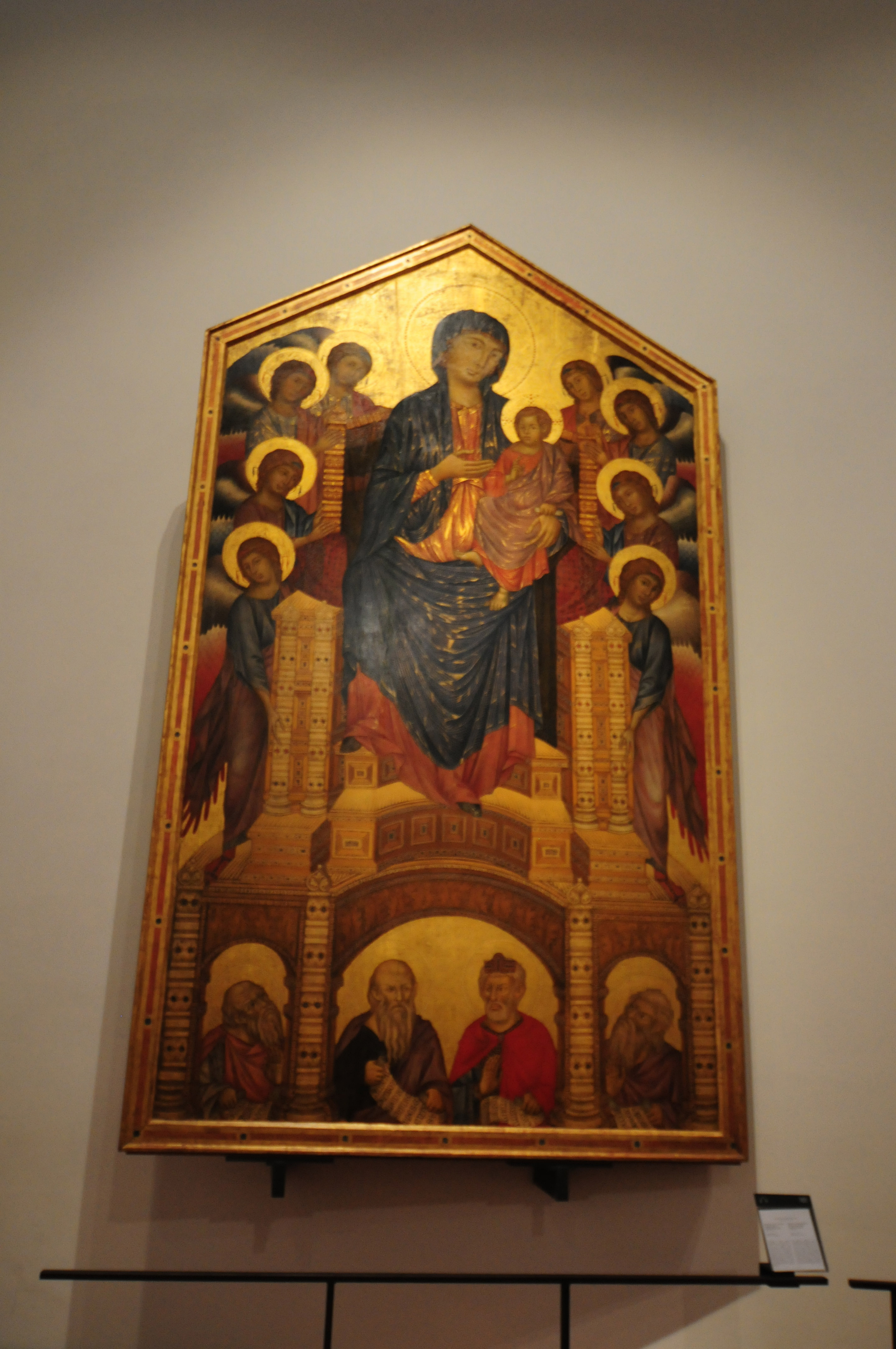 The Japanese Art Mission to Italy toured the historical quarters of Siena, which was registered as a World Heritage site in 1995. The sculpture at Gaia Fountain in Campo Square, regarded as the most beautiful in the world, is by the Renaissance master, Jacopo della Quercha, and it is an exquisite and substantial masterpiece, which had even compelled Leonardo da Vinci to sketch.

The group went up the Manja Tower, the tallest structure in old Siena, and was awe-struck by the beauty of the view of a tapestry of rooftops in sienna color, a color which is named after Siena. At 15:00, the Siena-Japan Friendship Art Exhibition opened in Magazzini del Sale of Siena Museum of Art. Mr Nobutoshi Akao, Senior Advisor of GA, gave the opening speech.

The opening address was followed by a welcome speech from Ms Yuri Bruni, Cultural Exchange Officer of Siena Cultural Bureau. The exhibit of Japanese children’s works struck a chord, particularly with Italian artists. 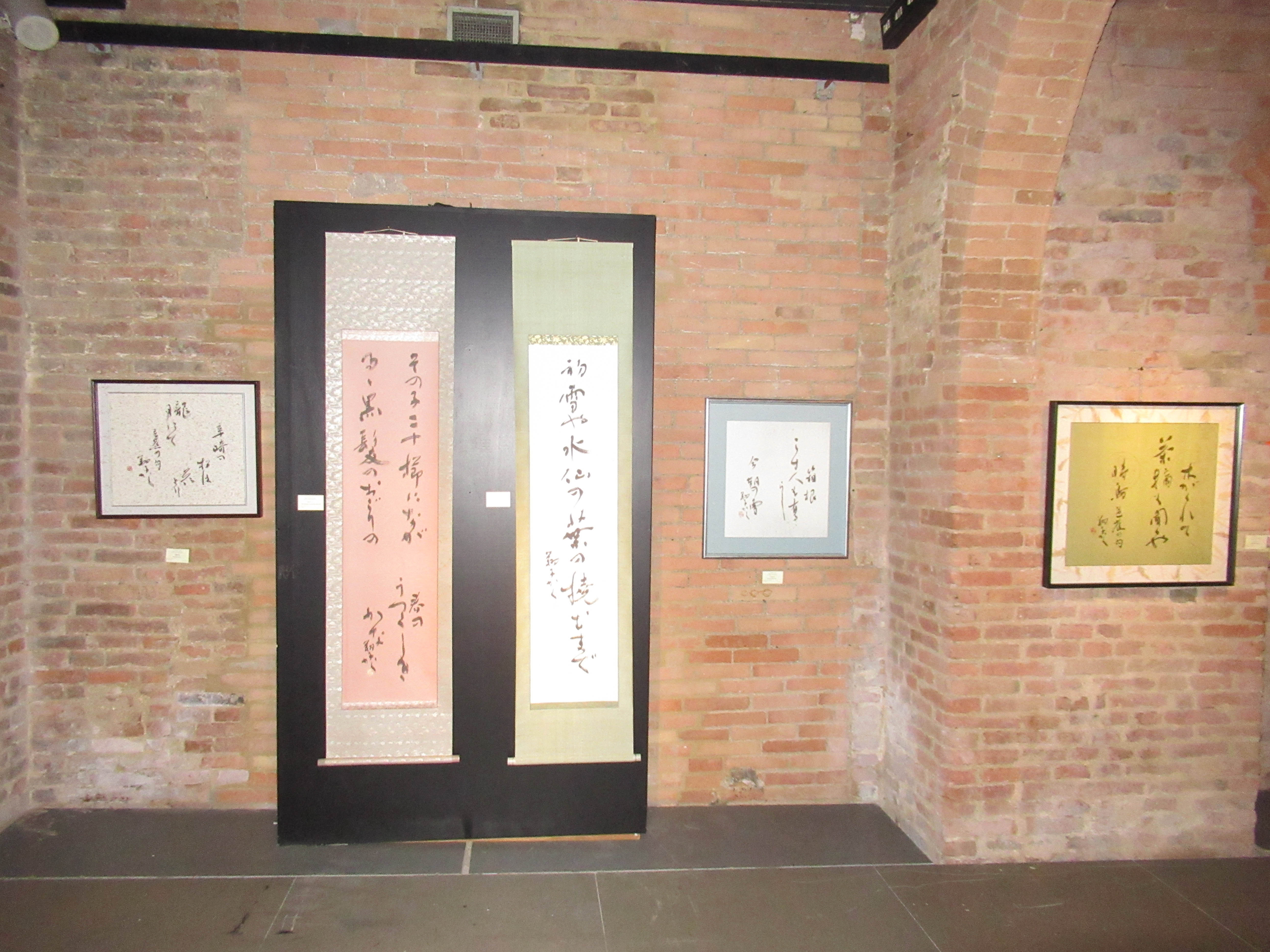 In the morning, the Japanese artists gave an art session for Italian elementary school children at the Children’s Art Museum of Santa Maria della Scala, adjacent to the Duomo, one of the architectures that represent Siena. They spent about an hour, teaching art to the children, and created a piece with them under the subject of “love and peace”. 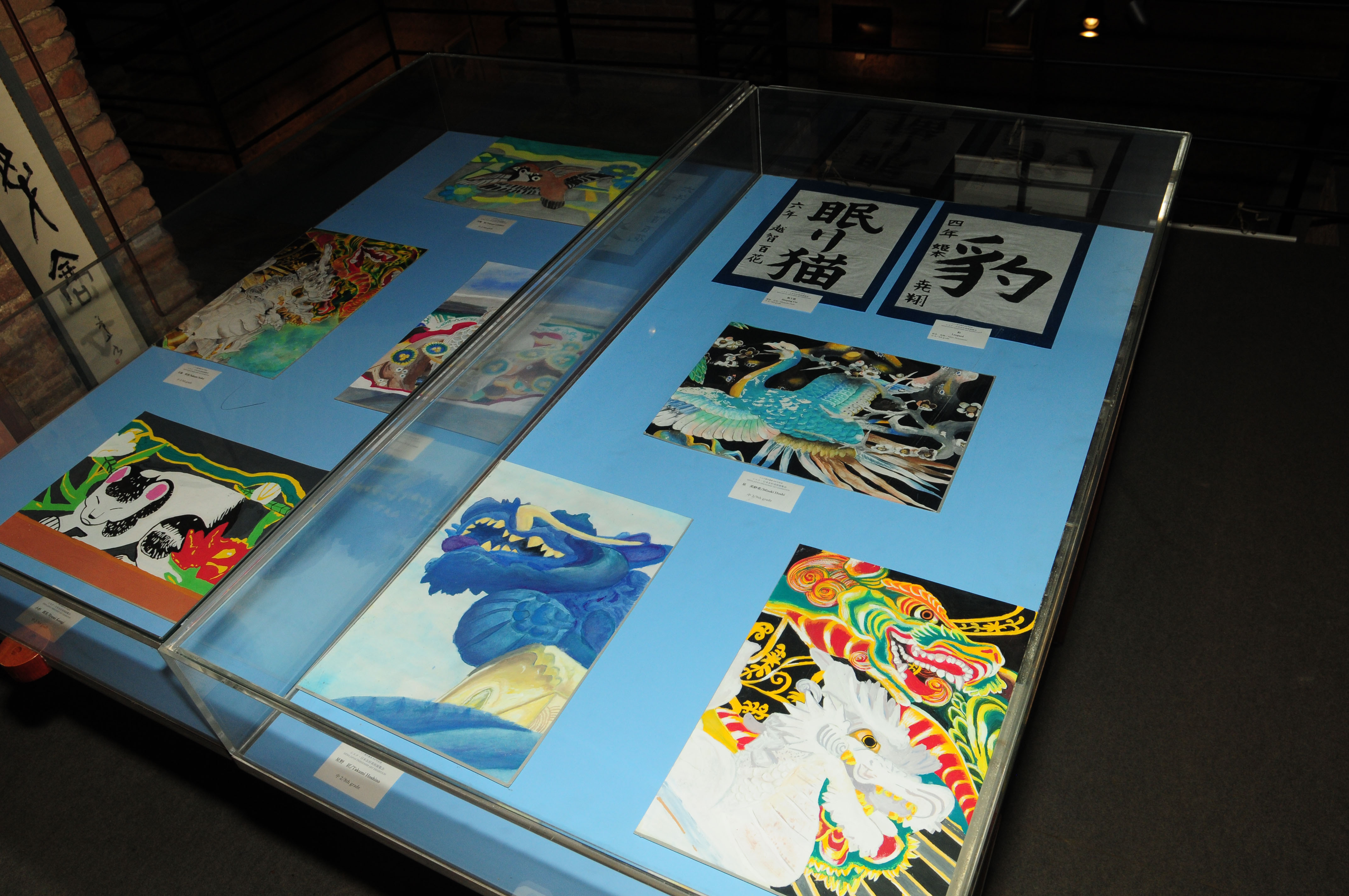 In the morning, the group traveled by a hired bus to Florence, the heart of the High Renaissance. It took about an hour and a half to reach Florence from Siena, and they arrived at Michelangelo Square on a hilltop. The landscape with one of Florence’s landmarks, Duomo, situated at the center of the city, looked like a beautiful painting, and the Arno flowing across the Italian peninsula from Florence to Pisa inspired a feeling of the city’s multifaceted history.

The highlight of the tour was the visit to Uffizi Gallery, guided by Dr Pierre Giacomo Petriori. One naturally thinks of Botticelli when it comes to paintings at the Uffizi. However, Dr Petriori introduced the group to the early Renaissance masters who laid the groundwork for the High Renaissance.

Giotto of the Florentine School, and Ambrogio Lorenzetti and Simone Martini of the Sienese School were introduced as the leading artists of the period.

The tour then started from the Botticelli room, and it introduced Filippo Lippino, a student of Botticelli, who completed his apprenticeship in the workshop of Filippo Lippi, as well as Leonardo da Vinci, Velocchio, Michelangelo, Caravaggio, and Rembrandt.

The Japanese artists must have lost track of time as they enjoyed a rare occasion of listening to commentaries given by an authority on the lives of artists at Vasari.

The group left Florence the following morning, arriving in Japan on the morningof of October 15, 2019 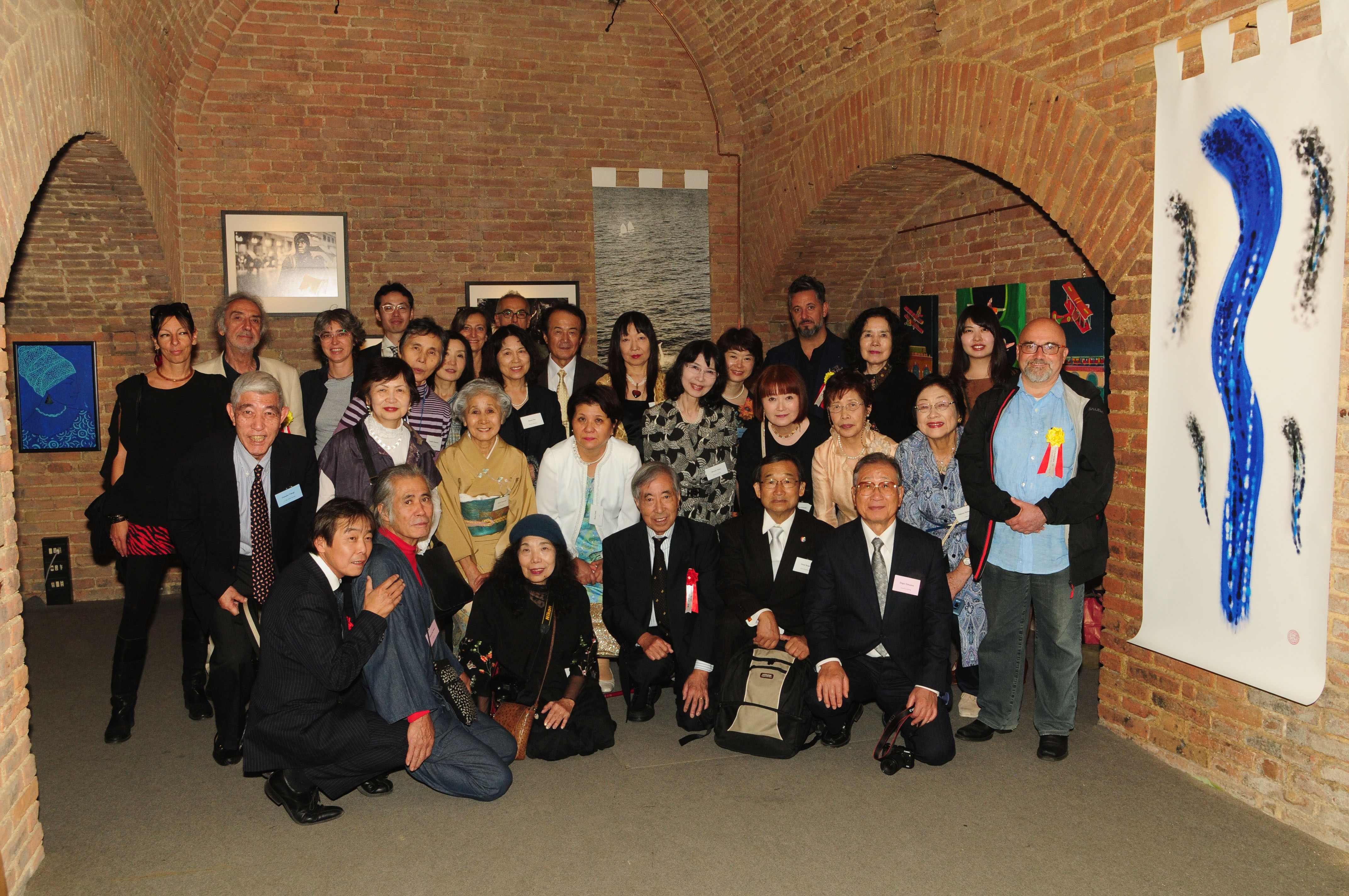 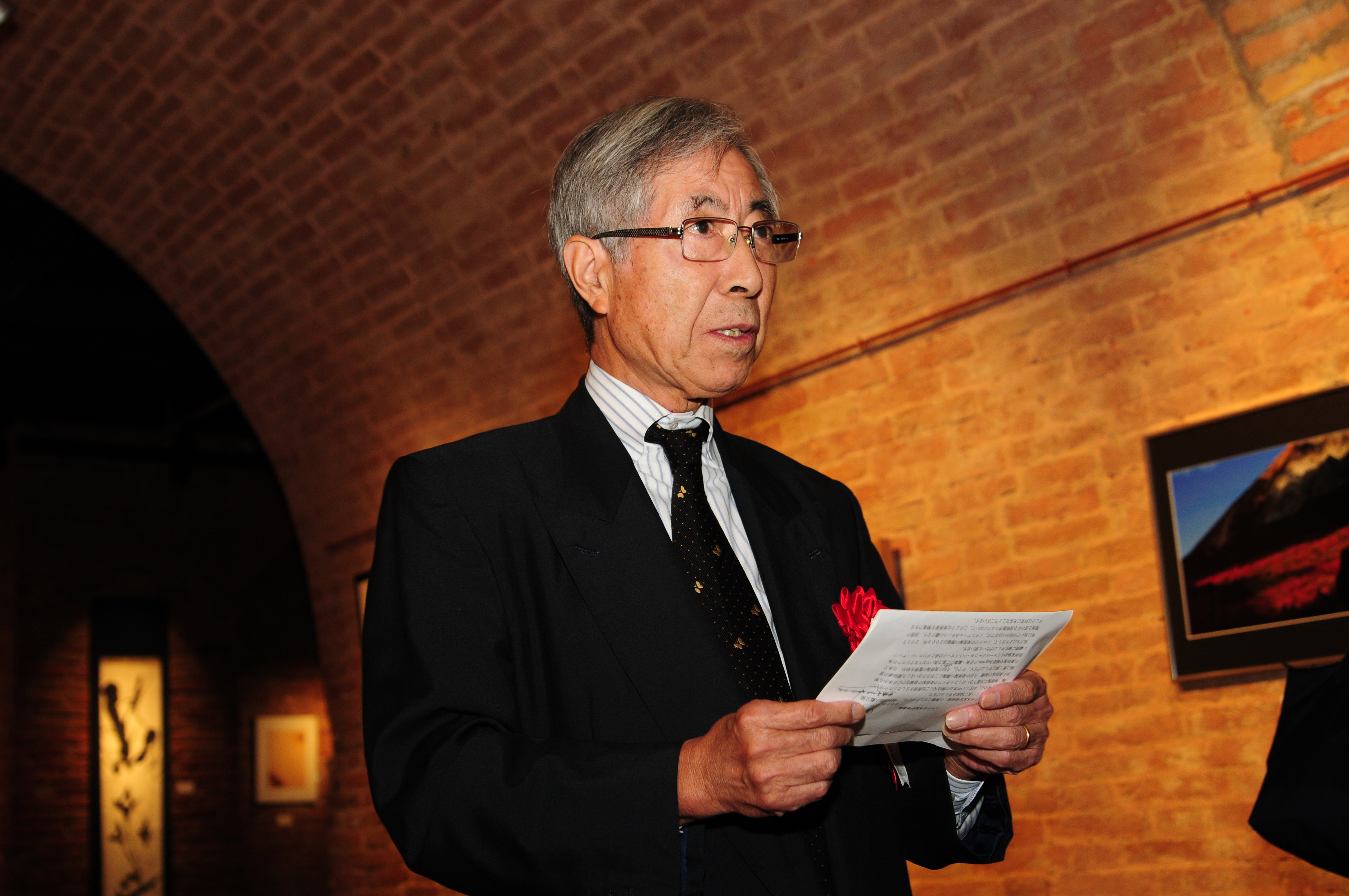 （Mr Akao served as Ambassador of Japan to the International Organizations in Geneva and Vienna respectively, the Japanese Minister Extraordinary and Plenipotentiary to the USA and Japanese Ambassador to Thailand, and successfully concluded trade negotiations of the GATT Uruguay Round in the early 1990s as the Chief Negotiator.）

I wish to say a few words as a representative of the General Incorporated Association Geibun-Association on the occasion of the opening of the Siena-Japan Friendship Art Exhibition.

Firstly, I would like to express my heartfelt thanks to Ms Yuri Bruni of the Siena City Cultural Bureau and the Italian and Japanese artists for coming to the opening ceremony despite their busy schedules. I also thank everyone involved in organizing this event. I wish to offer my special gratitude to Chairman Pierre Giacomo Petriori and Advisor Daniele Sasson of the Siena-Japanese Artists Association, who have supervised this exhibition. They have also been helping us plan art exhibitions in Japan and edit our magazine, Bun-ten.

This is our third art exhibition in Siena, after 2009 and 2013. It is such an honor to hold this event in Siena, a city of art regarded as the Mecca of fine art, which set the groundwork for Italian Renaissance.

I would like to use this occasion to give a brief introduction to the activities of Geibun Association.

First is that this year marks the 20th anniversary of our Association, which began in 2000 as the World Art and Culture Exchange. We changed our name to Geibun Association in May this year to commemorate the anniversary.

We hold exhibitions annually both in Japan and overseas, which included Thailand, Malaysia, Italy, Russia, Portugal, Lithuania, Sweden, and Hawaii.

The second is children’s education through art. We make it a rule to organize Children’s Art Session and Student Workshop when we hold art exhibitions both in Japan and abroad.

As you know, Siena is committed to children’s art education, and tomorrow, Japanese artists will be holding an art session for Italian children at the Children’s Art Museum in Santa Maria della Scala. Through art education, we aim to nurture creativity and intellectual curiosity in children, who will be responsible for the future.

It is my wish that the friendship between Siena and Japan, and indeed, Italy, will be further cemented through the exchanges with you on the occasion of this art exhibition. 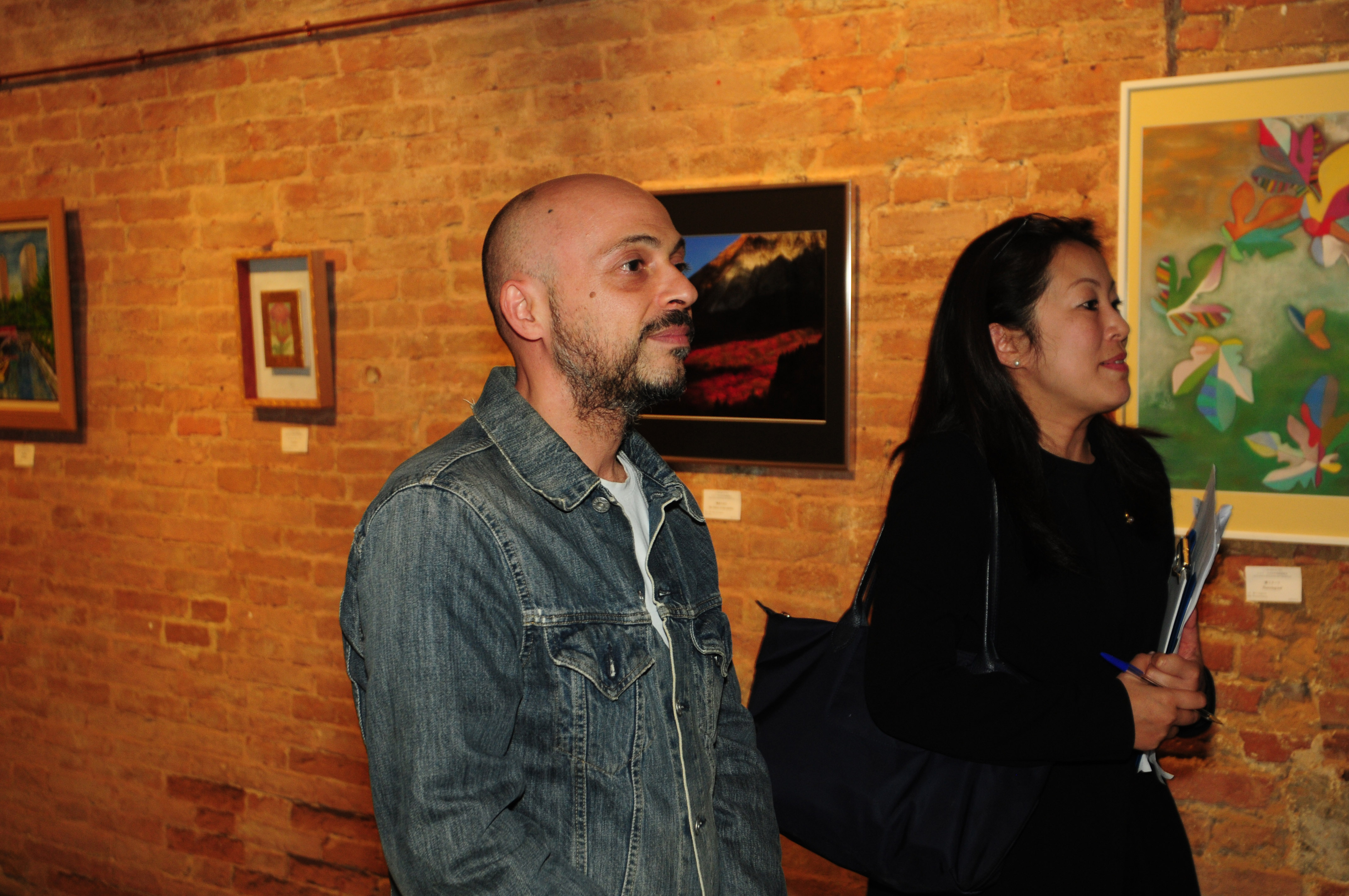 Welcome to Siena. Thank you. We have been engaged in this art exhibition exchange for many years, and I sincerely hope that it will continue for years to come. Exchange with Siena through art and children’s art education are the objectives of the Geibun-Association, and I genuinely believe them to be excellent. I am grateful for holding the events again in Siena. I look forward to seeing you again at this art museum next year.

(A speech by Prof. Daniele Sasson, Chairman of Prisma Multimedia Association and Advisor of Siena Japanese Artists Association, on behalf of the artists of Siena.) 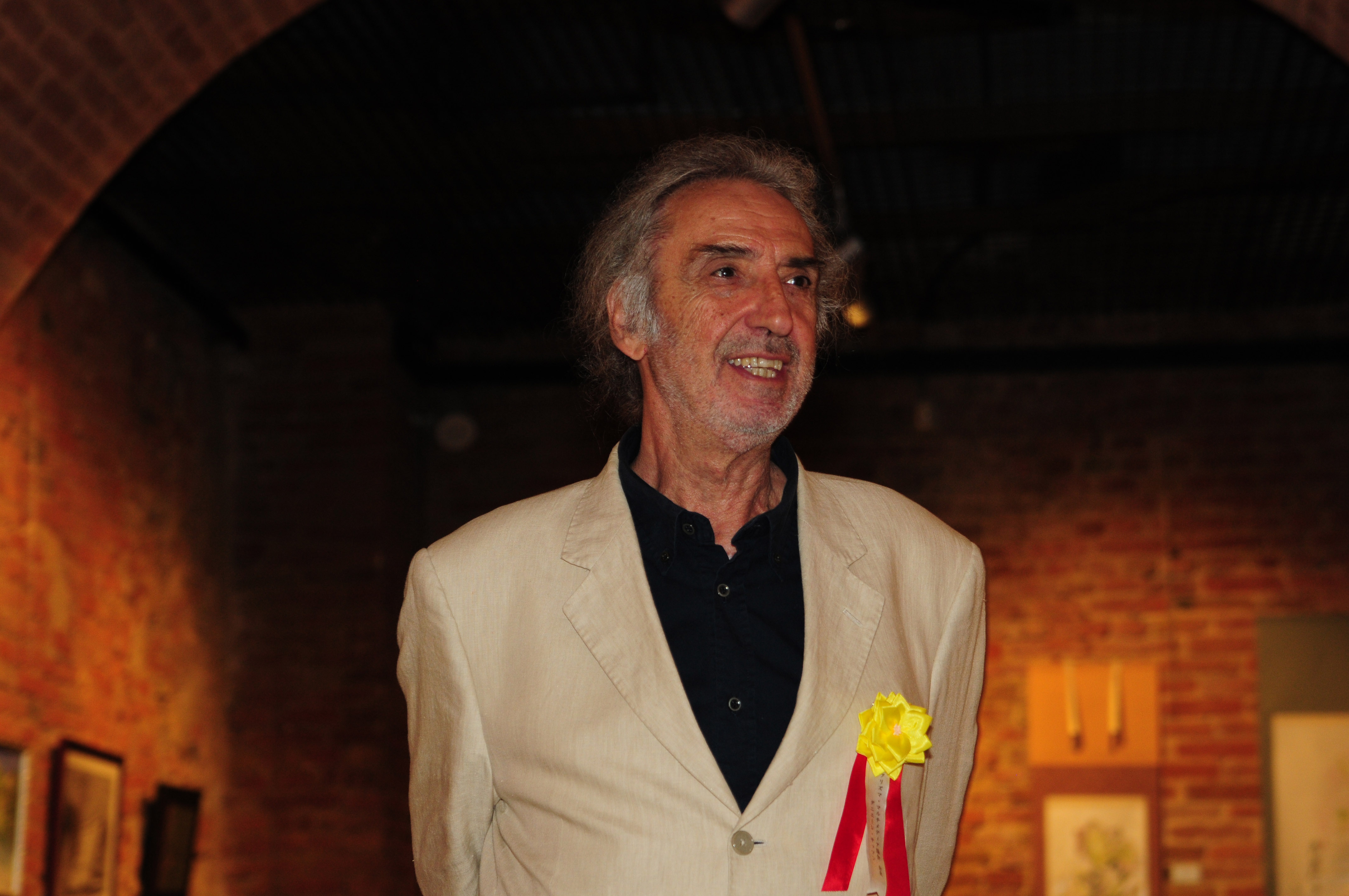 I already know everyone’s work and have met some of you, so I wish to welcome you all with due respect. We have had two exhibitions at this venue in the past and have shown works by Sienese artists as well, just as at this event. I hope you will all enjoy them as much as time allows. I pray that this third exhibition will be a success.